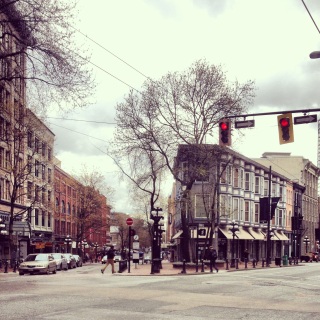 Yesterday I tried to give a little love back to the world.

I recently stumbled across (literally) a mix CD on the street in Gastown. The maker left no information other than a wish for me to listen and share a mix of my own. Since I absolutely love music and surprises and random acts of kindness, I was pretty stoked with this discovery. I was a little less stoked to find that the “mix” was actually just The Tallest Man On Earth’s most recent album, There’s No Leaving Now (with a few random songs thrown on the end). But I still thought it was a pretty awesome idea and having any real complaints regarding such a sweet gesture would be totally ridiculous.  Anyway, I chose to make a mix of my own (including one track from There’s No Leaving Now) based on a year in Vancouver (i.e., I tried to capture the mood of the city in a seasonal playlist). I made only one hard copy and left it down by Canada Place last night. I felt that this location would allow for a diverse array of potential discoverers. But, because I believe music in all its forms is worth sharing, I also chose to upload a digital version called seasons by the sea to 8tracks for interested friends to link to, and for strangers to stumble across. 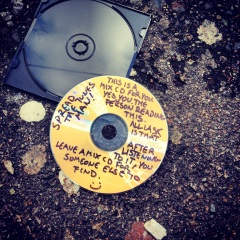 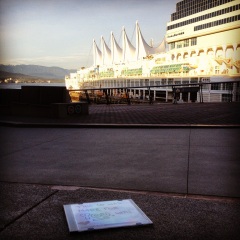 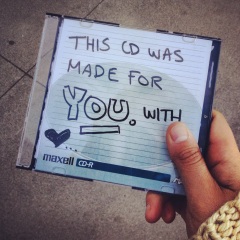 Now let me preface the remainder of this post by saying that I have a tendency to kill things. This is by no means out of malice or cruelty (in fact, I often get laughed at for my noble attempts at returning various arthropods back to nature instead of fly swattering them to death), but purely out of neglect. Take for example my most recent plant. It was an air plant (i.e., one of those spiky little cactus things with exposed roots). They don’t need dirt or fertilizer or even sunlight— they basically just sit there and live off of air. Yeah, I killed one. I forgot to give it its weekly bath. Three weeks in a row. Seriously.

Unfortunately, my track record also includes a few fish and some more delicate types of flora, including potted orchids, sunflowers, multiple lily species, pansies, and a beautiful hibiscus tree that I really did try my hardest to revive. In fact, the only plant that has ever survived longer than about a month under my care is my planted palm, Twiggy. But she’s special and I think I’ll talk more about her at a later date. The timeline of my duties as a caretaker follows a predictable sequence of events:

Days 1-3 (The Novelty Stage): I am excited to have a new plant. I name it. I take great care to read its instruction tag and provide it with all essential nutritional and habitat requirements. I have a plant, it looks beautiful, we are happy.

Days 4-10 (The Contentment Stage): I look at my plant and talk to it every day, thinking how lucky I am to have such a lovely specimen in my life. The plant is watered and cared for as suggested by its tag.

Days 11-18 (The Initial Neglect Stage): I continue to acknowledge my plant’s existence. However, the watering regime becomes irregular (or non-existant) and the plant begins to suffer. Perhaps it will be happier in a different location. I move the plant.

Days 19-21 (Rapid Decline): Plant is in obvious distress. If it had flowers, they have wilted and fallen. Leaves are droopy or dry. It looks sad. I fear I have incorrectly followed the care instructions. I assume that, if left, it will get better on its own.

Days 22-25 (The Intentional Neglect Stage): Plant does not get better on its own. Plant is near death.

Days 26-28 (The Heroic Measures Stage): I realize my plant is not improving. I go to exorbitant physical and economic lengths to undo my wrongs and give the struggling organism a second chance at life.

So hopefully it’s obvious that I genuinely want to be a good plant owner. And despite an apparent misunderstanding of botany, I really do stop at nothing when trying to revive the plant, right up to the end. These last ditch efforts stem largely from one of the main lessons in my favourite book, Le Petit Prince, and, incidentally, come from discussing the care of a flower.  The message is this: tu deviens responsable pour toujours de ce que tu as apprivoisé. (You become forever responsible for what you have tamed.) I see many meanings in this statement, and may get into it from a more abstract and metaphorical perspective in a different post. But from a behavioural standpoint, I firmly believe that when a person takes on the responsibility or ownership of another living creature (be it a daisy or a dalmatian), it is their duty to do everything they can to make that organism’s life as good as possible for as long as they can. And this is why I have spent over $70 this week in an effort to keep my new research assistant alive. 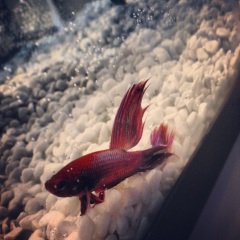 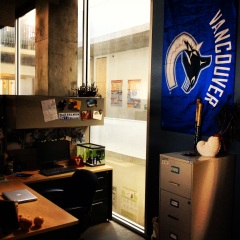 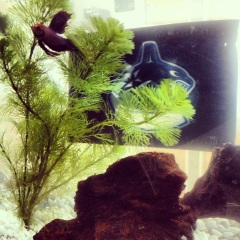 I bought a beta on Tuesday. He cost $7.99. His colours reminded me of an Indo-Pacific sailfish, so I named him Istiophorus platypterus. Izzy for short. My desk tank at the Fisheries Centre wasn’t exactly Buckingham Palace (just some gravel and a plastic plant with about 20 L of water), but I assumed this arrangement would be quite the upgrade from the small plastic cup he was living in at the pet store. Evidently I was wrong as he spent the rest of the day, and Wednesday as well, lying on his side in the corner of the tank or leaning on the fake foliage. Since I had never seen a fish do this unless he was on the verge of death, I was understandably quite concerned.  Some of my colleagues suggested that I just take him back and get a different one. But how could I? This animal’s life had been entrusted to my care and I was determined to do everything I could to save him. Or, at the very least, make his final few days as comfortable as possible. So I went back to the pet store for remedial supplies.

I only semi-explained the situation to the sales guy (I figured that a marine biologist with a dying beta wouldn’t exactly be taken seriously), and instead focused on living condition improvements that could be made. I thought that having a real plant was the first step. So I chose two. And of course got the stupid fertilizer and water enhancer to go with them. (That said, odds are they won’t last long…) I got a pump as well (not typically a beta requirement, but I assumed a little extra O₂ circulation wouldn’t hurt). And this meant I had to buy the necessary tubing, connection pieces, and air stones associated with this device. I also picked up a different type of food in case Izzy’s problem was dietary. And lastly, just in case he was determined to die on the bottom of the tank, I figured I should at least give him a place where he could feel sheltered and safe. So I chose a nice chunk of top grade Malaysian wood. What the hell, right?

Upon returning to the FC with a significant dent in my bank account (well, when you consider that Izzy himself cost less than the Malaysian wood), I went to fixing his home. The final tank addition, in the spirit of friendship and bonding, was a Canucks flag. (I figured he’d want one to match mine.) And his demeanour improved almost instantly. Come to think of it, his initial lethargy might actually have been distress over their first playoff game. To which I can totally relate. And on that note, I’ll end by saying that I really hope that the boys are able to pull their shit together and win tonight— because it would probably do us both some good.