Just so we’re all on the same page, I think it’s important to say right from the get-go that I believe in a strong calibre gradient when it comes to literature. As such, I don’t really consider something that’s featured as a must-read in TigerBeat to be in the same category as the likes of Dumas, Tolkein, or the Brontë sisters. And while I know I’m no Jane Austen, I do feel safe in saying that M.L. Stedman’s The Light Between Oceans is tied with Twilight as the worst book I’ve ever read. Which is surprising because over 2,000 Amazon customers appear to be in genuine awe of its existence (i.e.,  reviewers describe it as “complex”, “extraordinary and heart-rending”, and “irresistible… seductive…[with] a high concept plot that keeps you riveted from the first page”). Seriously, I’m convinced they were reading a different book. Because the only emotions I entertained throughout the entire novel were boredom and boredom. And maybe also boredom.

I’m not really going to relive specifics, but I guess I was expecting more than a sappy, predictable Nicholas Sparksesque beach book when I initially read the cover. The general plot is this: baby washes up on the shore of an isolated lighthouse island, couple claims it for their own, moral dilemmas abound! Truthfully, I think the storyline had solid potential. Unfortunately, the dialogue was completely unnatural and pedantic, the execution of the plot was simply one tearjerking attempt after another, and the writing was just downright abysmal. (Almost as redundant and prosaic as reading about Bella gazing into Edward’s eyes every five sentences). I especially didn’t like the female lead (Isabel) in Light because right from her introduction she seemed immature, needy, and possessive. I think Stedman was probably going for the free-spirit and independent woman approach, but despite the progression of time, I never felt like Isabel developed much beyond a self-centered, heartless cow. In fact, she only seemed to become more selfish, controlling and just plain annoying as the novel progressed. I did have a bit of sympathy for the male lead, Tom (mostly that he’d been written into such a predictable and uninspiring book), but ultimately he turned out to be a huge pushover. And a complete idiot.

Like Brave New World, The Light Between Oceans was a one-night stand. However, unlike Brave New World, I was left completely dissatisfied, and was just incredibly relieved when the ordeal was over. Which is surprising because not only is this book well revered on Amazon, but Chapters’ CEO Heather Reisman also highly recommends it, as do the undoubtedly equally literature-savvy Costco Buyers. (I endured additional distress when I saw Light on sale for only $9.99— half of what I paid— at the wholesale warehouse.) In this vain, I attempted to bring a little justice back to the world by leaving my own book endorsement for Kaz, since she had expressed interest in reading it when I was done.

Still, I think it was Cervantes who said that, “There is no book so bad…that it does not have something good in it”. So (mostly out of respect for old Miguel), I attempted to try to find something I liked about Light (aside from the moment I closed it forever). After a bit of thought, I decided that I actually did enjoy a couple paragraphs featuring narratives of the ocean. Since they were few and far between, I don’t mind taking up the space to share one:

The oceans never stop … the wind never finishes. Sometimes it disappears, but only to gather momentum from somewhere else, returning to fling itself at the island … Existence here is on the scale of giants. Time is in the millions of years; rocks which from a distance look like dice cast against the shore are boulders hundreds of feet wide, licked round by millennia …”

A tad melodramatic, but it reminded me of the opening pages of Thomas Trofimuk’s Waiting for Columbus. And since that was a book I did really enjoy, the thoughts evoked by this paragraph were ultimately quite positive. Oh, and I liked the book’s cover. Isn’t there some saying about books and covers? Anyway, that’s about it. As such, the subsequent abandonment I felt after being shipwrecked by this story resulted in a book buying binge, and the commencement of five new literary works (in addition to three already on the go).

One of my new purchases was Barbara Kingsolver’s The Lacuna. I had been eyeing this book for a while, mostly because I’ve taken a recent interest in Maya history and culture. (I was lucky enough to spend a day at the beautiful ruins of Tulum over my Christmas holiday and had an excellent tour guide who inspired me to learn more about this historic civilization.) Anyway, I’ve read a couple of non-fiction books on the topic (which were interesting, albethem rather dry at times), so when I saw Kingsolver’s book, I thought it might be an enjoyable read. Well, although partially set in México, The Lacuna has nothing to do with the Maya (not that she claims it does). Nonetheless, although I’ve really enjoyed it so far, delving into the first few chapters did evoke two initial thoughts: 1) I really want to go back to see more— much more— of México, and 2) I really want fish tacos. Given that the first wasn’t really a feasible option this week, I chose to heavily indulge in the second.

Normally when I have a taco craving, my first instinct is to hit up Taco Shack. This little fast food joint near Kits Beach (at Cornwall and Cypress) has some seriously amazing grub and I challenge anyone to find me better fish tacos in Vancouver. That said, I’d already been there once…twice…OK, fine— thrice…within the last few weeks. Luckily sunny days always make me feel particularly creative when it comes to culinary endeavours. So I decided to try and make my own. 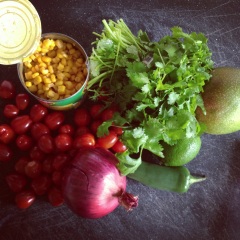 Ingredients were fairly straight forward and the only thing that presented a slight availability challenge were the corn tortillas. (I was aiming for maximum authenticity.) But, after a little detective work, I managed to track some down at a place called Fresh Is Best on Broadway. Of course the tortillas recommended by the store manager only came in packs of fifty. So I’ll be eating fish tacos for the next several weeks. (On this note: if anyone would like some corn tortillas, let me know and I’m happy to share.) However, if you’re not willing or able to track down corn flour tortillas, wheat-based, or rice, or whatever ones will probably still be just as functional.

Since I’m such a fan of Taco Shack’s flavour and presentation, I aimed to recreate their tacos as close as possible, but with a little added flare of my own (i.e., mango). There are four (super easy) components to the tacos. The ingredients (I’m really bad when it comes to specific measurements, as you will soon observe), and methodology (from grocery bags to stomach in less than 20 minutes) are as follows:

Once all the ingredients are chopped or diced to an optimum level (i.e., one that suggests you won’t choke), toss them in a bowl and squeeze in the juice of a lime. You can also add a bit of salt and pepper if you want. This amount of salsa (and all subsequent components) is enough for 12-15 generously filled tacos.

Just mix it all together in the order described. I tend get really excited about adding spices to things, so in truth I probably used more than I’ve written here. I just shake things in and go by taste but I think the ratio suggested above is probably a good starting point. Obviously, if you really like the flavour of one of these, then go to town until you think it’s at an optimum level.

Mash the avocado, add the chili powder, and squeeze in the lime. Again, add salt and pepper to taste if you want.

You can use whatever type of meat you want: I’m confident they’ll still taste delicious. That said, this attempt featured sustainable yelloweye rockfish (4 fresh fillets in total). This is really unspecific, but I’d say that a standard size / portion of meat (i.e., ~120 g fillet or piece) will definitely be enough for four tacos. Pan-frying (~10 min for the fish) works great, and I assume that cooking it on the BBQ would as well.

Once all this is ready, simply heat up the tortillas (about 15 seconds each side in the frying pan does the trick) and assemble! I don’t think there is a right or wrong way to do this, but I spread the guac first, then added the fish, then the salsa, then a sprinkle of chopped red cabbage, and finally a few dollops of the white sauce.

All in all, I was super impressed with how they turned out, and feel that they more than compensated for the lacklustre literary experience earlier in the week. Thus, homemade fish tacos will be in solid circulation throughout the summer and I’d be delighted to cook them with anyone who wants to come by for a meal.

*I was taught that the easiest way to cube a mango is to cut off large chunks of the flesh, getting as close to the stone as possible. Once it’s in four pieces, score it to the peel and slice it off from the inside. This keeps the mess to a minimum and helps maximize mango usage.

2 thoughts on “Shipwrecked by novel. Saved by tacos.”