I was in Halifax when Qila died suddenly last November. Fortunately, I made it to Vancouver a few days later, to see Aurora before she passed away too. In an attempt to deal with my grief, I wrote the following memoir about our time together and the profound way in which these whales impacted my life.

It is a tragic coincidence that a couple days ago we lost another member of our Aquarium family, Chester. I assume this will resonate with many of those who felt close to him and hopefully provide some comfort.

I am one of over 450 current staff members and nearly 1,000 volunteers—not to mention the millions of guests and former employees—whose life has been touched by the animals of the Vancouver Aquarium since it opened in 1956. We all have a unique and special story and I wanted to take a moment to share mine.

For me, the death of our two resident belugas, Qila and Aurora, has led to some of the most challenging and heartbreaking days I’ve ever experienced. And it’s ok if you don’t understand how that’s possible. How the death of a pair of whales can weigh so heavily on one’s heart and mind and mood. I will do my best to help you understand. Because they were more than just a pair of whales—they were two of my oldest and most cherished friends. And they were the foundation of my life-long passion for the ocean—and all its creatures—and my sincere desire to help alleviate the threats it faces as a result of human behaviour.

I have photos of myself in Stanley Park that pre-date my memory of visiting the Aquarium. As a little kid, it was my favourite place in the world and I would get giddy with excitement whenever I got on the #19 bus with my Nana. Uninterested in the geese and rose gardens, I’d rush through the park as fast as my legs would carry me until we got to Bill Reid’s bronze orca. From day one, the belugas were my favourite and even after we’d spent hours roaming the galleries, I’d beg for just a few more minutes to watch them. 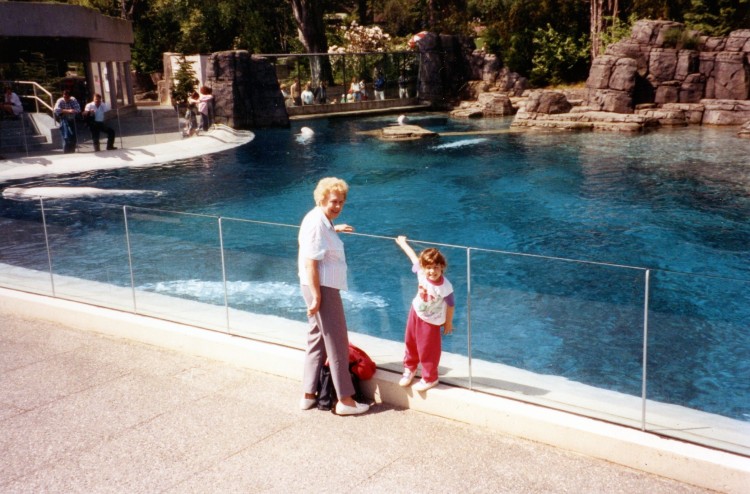 At age four, I had the first of two corrective eye surgeries. To provide comfort as I went into the operating room, I was allowed to bring a toy of my choosing. Naturally, I dragged in a stuffed beluga that I’d named after Aurora. It was roughly the same size as I was.

Visits to the Aquarium continued and when I was eight, I learned that Aurora was pregnant. Fascinated by the thought of a baby whale, I asked my Nana countless questions about whale pregnancy. She bought me books and documentary videos and did her best to help me learn more about these animals. I remember the day Qila was born. I wasn’t there but I went to see her for the first time only a few days later. I wanted to do something special for her. But what do you do for a baby whale? Maybe because the answer escaped us all, my Nana suggested I send a card.

So began over a decade of correspondence with Qila (through John Nightingale, the Aquarium’s CEO and President). My Nana would help me choose a card for every important occasion—birthday, Halloween, Thanksgiving, Christmas, Valentine’s Day, Easter—and we would send it to Qila, along with some money for a fish. Over the years, I must have sent at least 50 cards. And John responded by hand to thank me for every single one.

For Qila’s first birthday, we took in a Safeway cake that I had decorated with ocean decals. I remember sitting in the back seat with the cake on my lap as my Mom drove. The stupid candle wouldn’t stop humming a tinny version of ‘Happy Birthday’ after we’d done a practice lighting to see if it worked. The cake was small, so there was only enough for some of the office staff. In subsequent years it was much bigger. 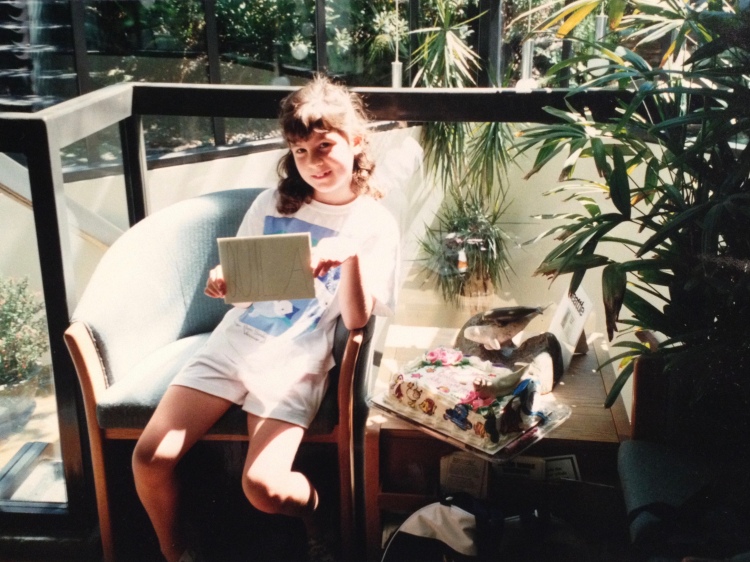 Only a couple months after Qila’s first birthday, I got the surprise of a lifetime. John had arranged for me to go in and meet Qila and Aurora. I didn’t know about this plan until the morning of, and when my Mom told me, I was so excited I couldn’t eat. As I entered the beluga habitat with their trainer, Brian, I remember shivering when my purple gumboots filled with freezing water. I couldn’t have cared less. There are only a few others that can compete for the best day of my life.

A few weeks after this remarkable experience, I spoke for the first time to the Vancouver Park Board about how important it was for kids to have an opportunity to go to the Aquarium to see these whales first-hand. I remember being scared to death and having to pee like a racehorse as I rambled on for much longer than everyone else. But I knew we had to convince them. Luckily, we did.

On Qila’s fifth birthday, I got to go in and visit her again. This time I took my Dad in too. By this point, the Beluga Encounter program had started and everything was a little more organized. They even gave us hip waders and life jackets.

When I was seventeen, I called to see if some of my high school friends and I could come in before our prom to take pictures around the Aquarium. It had been a little while since I’d been in touch and I was put through to John’s new assistant, Yasmin. I remember our conversation as if it was yesterday. I started out with, “Hi my name is Laurenne. I don’t think we’ve met so you probably don’t know who I am—“ only to be cut off by, “I know exactly who you are.” Today, Yasmin remains one of my dearest friends.

I started at the University of Guelph in 2006, with every intention of becoming a marine mammal veterinarian. However, around this time, I also became cognisant of the many negative impacts humans are having on our oceans. For the first time, I started learning not only about animal physiology, but also about overfishing, pollution, and climate change. And, despite my desire to help the animals I cared for so deeply, I realized I wanted to help the ocean in a different way. And so I entered the field of fisheries science. 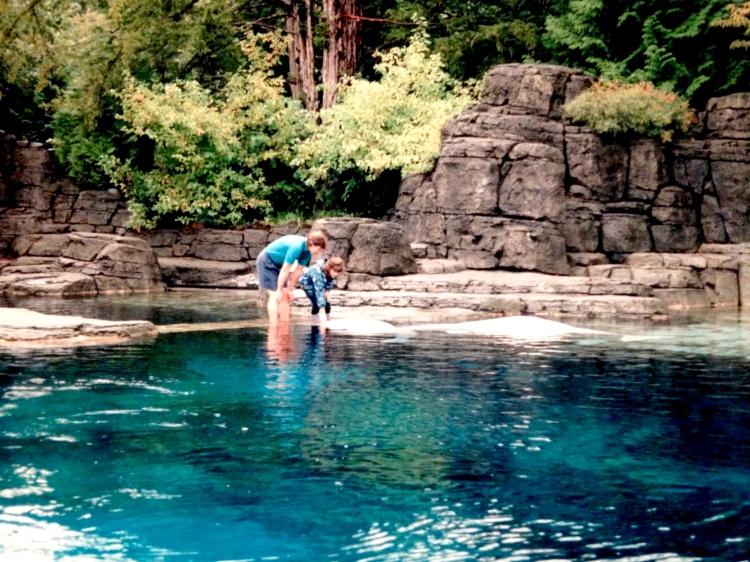 Endlessly supportive of my passion, all throughout my undergraduate degree, my Nana sent me whatever Vancouver Sun newspaper articles she came across related to whales, the ocean, and the Aquarium. I kept them all.

In June 2008, I was sitting in a small internet café in Maun, Botswana when I learned that Qila had given birth to Tiqa. I was beaming from ear to ear as I wrote John an email. I was coming back to Vancouver later in the summer and I couldn’t wait to visit.

That August, I was waiting in line with my family (only a few people at a time could go to the underwater viewing area to look) when I went upstairs to grab a drink. There, I spotted one of the trainers I remembered and went to offer my congratulations. Before I even had time to tell my family, he snuck me into the beluga habitat for a first-hand hello.

I had missed the Aquarium while I was in Guelph and when I moved back to Vancouver to start my MSc. I made a conscious effort to visit as frequently as I could. And more than once, stressful mornings on campus led to calming afternoons by the beluga habitat. I would ramble aimlessly to Qila about all the problems with my thesis and the world, and even though I knew she had no idea what I was saying, it always made me feel better. She couldn’t solve my technical troubles but she gave me purpose.

My Nana died the summer after I returned to Vancouver. After coming back from my parents’ house, the first place I went was the Aquarium. Somehow being near Qila and Aurora calmed my heart in a way no other comfort could.

Two years later, in July 2014, I spoke again to the Park Board on the issue of keeping cetaceans at the Aquarium. This time, I think I spoke less but I still did my best to ensure my message was conveyed just as sincerely as it had been two decades prior.

When the Aquarium’s Ocean Wise program hired me after I finished my MSc. I worried how I would be received. I thought that being “the beluga girl” from John’s stories was a pretty big reputation to live up to and I assumed people would think I got the job because I had some good connections. But that wasn’t the case at all. Instead, it was like coming home to a family with some relatives I just hadn’t met yet. And the more time I spent with my colleagues, the more I came to love them. I was surrounded by genuine, intelligent, caring people who were just as passionate about the Aquarium’s animals and mission as I was. Although everyone has a favourite, no one works at the Aquarium because of any single species or specific animal. We are here because the ocean and all its creatures need a voice—now more than ever—and each of us in our own way believes we can help be that voice and share it with the world. The last few weeks have brought us to our knees. And yet, although our hearts are broken, our family is stronger than ever.

There are times when I went months without seeing Qila. Yet she was still a constant companion in my life, whether I realized it at the time or not. I’ve written just a few of the countless memories I have, as I remember them. But this is far from the whole story. The whole story cannot be conveyed in words because it transcends any spoken language. Qila and Aurora are irreplaceable. And while I’ve shed more than my fair share of tears this week, something hit me recently and I couldn’t help but smile.

They say you can choose your friends but you can’t choose your relatives. By and large, I believe this to be true. But I also know there is an exception to every rule. For me, Qila and Aurora were that exception. Some might suggest my bond with these whales formed because I was young and curious; maybe it was thanks to my family, who was infinitely supportive of my interest; possibly it was because John was thoughtful enough to reply to the quirky little girl who once sent a card for a whale. All of these are likely true to an extent, but I know it was more than that.

Anyone who has ever met a beluga can tell you what it was. Because the thing about belugas is that they don’t just see you—they look at you. They look into you. I was only a kid but that look from Aurora hit my heart in a way nothing ever had. And, despite nearly three decades of experience, I was just as helpless to it last week when I saw her for the last time. I doubt I’ll ever understand how I loved them so much. All I know is that I did. And I always will.

6 thoughts on “How to love a whale”