Do you ever have those moments when you think to your (present) self how much you appreciate your past self? For me, this usually happens when my past self has done something really nice to help me (i.e., its future self) out. Something like leaving extra bobby pins and a hair elastic in my coat pocket. Or remembering to bring the umbrella back from campus even though the sun came out just so I wouldn’t be SOL during the next thunderstorm. Or, more recently, refilling the poo bag container immediately after using the last one so that I’m not left staring at a massive pile of dog shit in the middle of a deserted field with naught a bag in sight. Anyway, these are things that my past self has been known to do. Somehow though, it did have one recent major slip up. (Warning: the rest of this post, including the photos, may not be suitable for a squeamish reader.)

I’m not even sure how the idea came to be. But clearly my past self didn’t think too much of it at the time, because it failed to remove me from the conversation even as fervor for the idea intensified. The idea was this: homemade haggis. I know, right? It really is incredible that such a notion didn’t send off enough internal warning bells to wake Quasimodo from the grave. Maybe I just thought the idea was too outlandish, too much the by-product of a little too much beer and a few too many fisheries scientists one Friday night. But whatever the reason, the idea slipped right under the radar. So much so that I even found myself involved in the organ acquisition process at the butcher shop. ‘Oh, yeah, well if you can get the lungs, then that’s great. Otherwise I guess we’ll just take two hearts instead.’ What was I saying? It was like being caught in the vortex of the $7.72 purple cabbage all over again. And not only that, this was the second conversation we’d had. The first one involved our butcher explaining that getting sheep lungs would be challenging because we would need a scientific research permit to use them. A what now? Yup, no bells. Not even a tinkle.

The innards arrived in a big, label-less, cardboard box. Wilf picked them up the night before the big event. When he came home, his first words were, ‘So there was a bit of a mix up’. Which is a fair statement when the spelling on the cake you ordered isn’t what you expected, not when you are dealing with multiple intact organ systems of a sheep. He continued, ‘So he was able to get the lungs (oh yay!), but apparently the supplier didn’t include the stomach. So he gave me some intestine instead.’ (It was impossible to ignore the 2 ft-long trachea that had somehow made its way into the box as well…)

But luckily we weren’t alone in this mess. (I can say with certainty that neither of us would be crazy enough to get into this on our own). Luckily, we also had Fred, our Master Chef. As I think I’ve mentioned before, Fred is French. And thus he believes that he can cook anything. (This is a safe belief, however, since nothing he has ever made has been anything short of Michelin-star calibre.) And, while I’ve mentioned that the origin of the homemade haggis idea is a bit fuzzy, I am 99.9% sure that Fred is the one who provided it with its first breath of life. Possibly to counter a retort by Alasdair (our half-Scottish friend) who suggested that haggis is impossible to make from scratch and not even the bravest Scot would attempt to do so, or possibly because Fred was in Glasgow over the summer and tried some there, or possibly because the news was aflutter with the independence movement last month. Whatever the reason, it mattered very little as I stared into our box of fresh, bloody, sheep guts, feeling like I was in one of my undergrad vertebrate physiology labs all over again.

I think most people are familiar with the dish, but let me briefly summarize what goes into haggis, in case the preceding interlude caught you off guard. According to Wikipedia: ‘Haggis is a savoury pudding containing sheep’s pluck (heart, liver and lungs); minced with onion, oatmeal, suet spices, and salt, mixed with stock, and traditionally encased in the animal’s stomach.’ How delightful. And while I really do love trying new recipes and experimenting in the kitchen, I do not equate cooking something that probably sustained soldiers during the Rough Wooing to swapping raisins for cranberries in my oatmeal cookies. Nonetheless, possibly for the sake of culture and friendship, clearly my past self thought this would be a valuable experience.

Fred arrived at 2 p.m. He first pan-fried the onions, then quickly set to separating and cleaning the various organs. When asked about his aptitude for trimming lungs, Fred responded casually with, ‘I used to do this as a child whenever I went to my grandparents’ place. You know.’ Uh huh, Fred. Sure I know, I thought. My visits to my grandparents’ involved colouring books and tea parties for my stuffed animals. Anyway, within an hour, the lungs, heart, and liver were diced apart and bubbling away on the stove. During this time we took the opportunity to duel it out over a friendly game of Monopoly. Thanks largely to a well-timed ‘Free Parking’, Fred made easy (well, 2+ hours) work of Wilf and I. (I’m also convinced that Cousteau ate half my money, but I didn’t want to implicate him…) I was actually really surprised at how much I enjoyed the game, and find it amazing that I hadn’t played it since elementary school.

Once the organs had boiled for a few hours, Fred started the second part of preparation: chopping. He finely diced all of the meat, and mixed in the appropriate spices, onions, and oatmeal*. And here it got a little tricky. Since we didn’t have the stomach, the next step involved stuffing the intestine. On the advice of our butcher, we modified a plastic bottle into a funnel and used this to generate enough concentrated force to push the organ mix into the casing. Naturally this process was very time consuming, but after about an hour, Fred started the first batch of haggis sausages. Boiled in the broth from the first step, the sausages were put on the stove for another 90(ish) minutes to cook. It was at some point during this stage that Alasdair arrived, and it wasn’t long before he, too, was armpit deep in haggis. Meanwhile, Wilf set to preparing the iconic haggis side dish: neeps and tatties, and I took Cousteau for a stroll. (This ‘stroll’ was actually an attempt at running away, but Cousteau couldn’t bring himself to be parted from the scent of boiling meat for long and forced me to return.)

Finally, around 8:30 p.m., everything was ready. And, in true, Scottish fashion (apparently), we filled our glasses with fine scotch and Al read the Address To A Haggis (Robert Burns, 1786):

Fair fa’ your honest, sonsie face,
Great chieftain o’ the pudding-race!
Aboon them a’ yet tak your place,
Painch, tripe, or thairm:
Weel are ye wordy o’a grace
As lang’s my arm.

The groaning trencher there ye fill,
Your hurdies like a distant hill,
Your pin was help to mend a mill
In time o’need,
While thro’ your pores the dews distil
Like amber bead.

His knife see rustic Labour dight,
An’ cut you up wi’ ready sleight,
Trenching your gushing entrails bright,
Like ony ditch;
And then, O what a glorious sight,
Warm-reekin’, rich!

Then, horn for horn, they stretch an’ strive:
Deil tak the hindmost! on they drive,
Till a’ their weel-swall’d kytes belyve
Are bent like drums;
Then auld Guidman, maist like to rive,
Bethankit! hums.

Is there that owre his French ragout
Or olio that wad staw a sow,
Or fricassee wad make her spew
Wi’ perfect sconner,
Looks down wi’ sneering, scornfu’ view
On sic a dinner?

Poor devil! see him owre his trash,
As feckles as wither’d rash,
His spindle shank, a guid whip-lash;
His nieve a nit;
Thro’ blody flood or field to dash,
O how unfit!

But mark the Rustic, haggis-fed,
The trembling earth resounds his tread.
Clap in his walie nieve a blade,
He’ll mak it whissle;
An’ legs an’ arms, an’ hands will sned,
Like taps o’ trissle.

Ye Pow’rs, wha mak mankind your care,
And dish them out their bill o’ fare,
Auld Scotland wants nae skinking ware
That jaups in luggies;
But, if ye wish her gratefu’ prayer
Gie her a haggis!

Albeit a bit of a mouthful itself, I wasn’t actually in too much of a rush to get to the eating part of the evening. The grey mushy pile on my plate really didn’t look overly appetizing, and I would have been just as happy to have straight scotch for dinner instead. But, being the true gentlemen they are, my companions urged me to stop being such a wimp and just try it. Which of course I did. And, honestly, it wasn’t the worst thing I’ve ever had. I mean, it will by no means be a staple in our weekly menu, but it did have a pretty nice flavour and went well with the mashed veggies. I think my main hangup was in its texture and colour, which hopefully is understandable. In eating this meal, I thought that it was actually a shame that more people in North America don’t have much interest in cooking organ meat. It’s less expensive and also probably less wasteful than the more desirable cuts of meat. Still, I definitely think it’s a taste that must be acquired from a pretty young age, otherwise it does hit the tastebuds in a rather foreign way.

That said, I am glad to have tried haggis at least once, and I am equally grateful to both my past self and my wonderful friends who are more than happy to push me to the edge of my comfort zone (culinary or otherwise) whenever possible. As far as the actual quality of our haggis goes, Al said that it was among the best haggises he’d ever had and that Fred, despite his French roots, prepared the dish beautifully. (Unsurprisingly, my favourite part of the meal was the dessert: cranachan prepared by Al.) The remainder of the night was spent drinking whiskey and chatting over the classic Scottish card game of Uno—truly, it was a night that will be hard to beat for many nights to come. 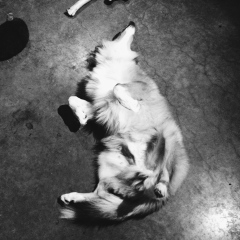 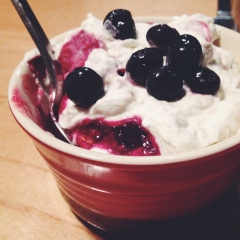 *For anyone who is inspired by this post and would like to give homemade haggis a try for yourself, you can follow the recipe we used, or find one similar online.

2 thoughts on “The Day of The Haggis”