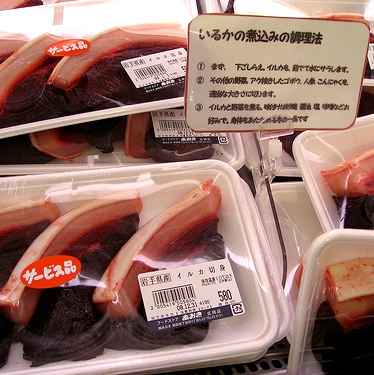 My facebook and Twitter feeds have been aflutter this week with news and comments about the annual Taiji dolphin hunt. And, since this topic was another point of contention between Wilf and I (despite what it must sound like, we actually really do like each other), I may find myself hungry and homeless after writing this post. But I think it’s something that needs to be discussed. (Just a warning, there are some fairly graphic pics in this post, so consider averting sensitive eyes.)

I’m going to write about two aspects of the Taiji hunt that just aren’t sitting well with me: 1) The Japanese rationale for the hunt itself and 2) the ‘western’ public’s reaction to the hunt. I anticipate the second half of this post being a bit more contentious, but I think it’s just as important as the first part. So, I encourage everyone to read this entry to the end. (As always, I’m interested to hear feedback and ideas from others because I think this is a really hot topic in the world of marine conservation and animal rights circles so I’d be happy to have a healthy discussion with anyone who’d like to share their views.) 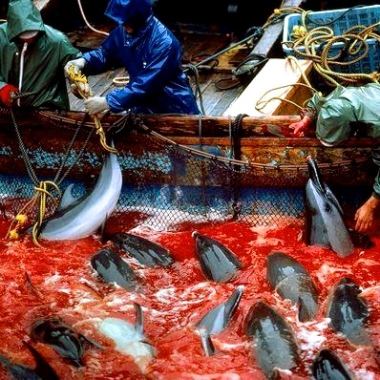 Right then: Point #1. Japanese people have been hunting whales and dolphins for centuries. However, this custom was only recently initiated (i.e., the late 1960s) in Taiji. So, the local excuse that this is a deeply cultural practice for the fishers of this town and the Wakayama region is a pretty substantial stretch. But fine, I understand traditional whaling for subsistence still exists and does have cultural significance, so I’ll generously give them the benefit of the doubt there. But before I move on, let’s quickly look at the main component of that ‘subsistence’ angle: the meat itself. Dolphin meat isn’t typically regarded as quality eating, and it doesn’t fetch very much at the local grocery store. However, this isn’t the problem. The problem is that Japanese bottlenose dolphin meat is heavily contaminated with toxins—including a concentration of mercury that is up to 24 times higher than the permitted safe level set by the Japanese government (see here for more info). Eating these animals isn’t healthy, so selling their meat should be prohibited. For me, it’s the same as selling cows infected with BSE or shellfish contaminated with ciguatoxin. Often, this meat is also mislabelled (intentionally or not) and sold as baleen whale meat (which has lower mercury concentrations), so consumers may not even be aware that they are eating a dangerous product. 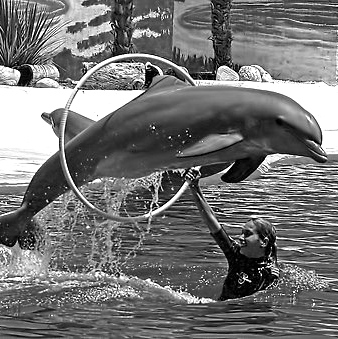 So, with such a low economic worth and relatively high health concerns, why does the dolphin hunt continue to take place? Well, it’s probably not much of a shocker but, in my opinion, the real incentive for this hunt is the multi-million dollar marine park industry. And this really bothers me. As discussed in my post on Blackfish, I am not a fan of amusement parks that exploit cetaceans for entertainment and as far as I am aware, those are the types of places that are buying Taiji’s captured dolphins. According to this article by Nat Geo, between 2000-2005, an average of 56 live dolphins annually were sold for captive display. From 2006 to 2012, the annual average more than doubled to 137. Needless to say, I’m sensing a trend. Especially when a single dolphin can fetch between $US40,000-150,000. So in my mind, suggesting that this activity is a traditional subsistence hunt and that some dolphins just happen to be sold to theme parks is complete bullshit. And this false justification, along with the ultimate outcome of the dolphins captured is the main reason that I have a problem with it.

OK, so now the more contentious side of things: Point #2. I saw The Cove at the theatre when it first came out in 2009. And, like most animal lovers, I was shocked at what I saw. I thought it was barbaric and inhumane. And yet—whether we consciously consider it or not—this is what is done en masse to millions of animals every year. And they end up on our plates.

I’ve seen so much outrage on facebook this last week over the Taiji ‘slaughter’, and almost none of it has been with regard to any of the points I just made. Rather, it pertains to the idea that killing dolphins is morally wrong and unacceptable. While this may be true to some, it comes off as an unbelievably hypocritical point of view, since most of these comments come from western countries, which have some of the highest per capita meat consumption rates in the world. (In case you’re curious about how much meat your country consumes, here’s the full list.)

In my opinion, the only people who should have any right to comment about the cruelty of this dolphin hunt are those who are vegan. That’s it. Regardless of whether an animal was raised on a farm or caught in the wild, if you eat meat, if you eat fish, if you wear animal products, you need to get down from your high horse and realize that at the end of the day, this is just like any other fishery or animal product industry. And, like most of these industries, it probably won’t be sustainable in the long-term. (This point is still disputed, as none of the dolphin species are endangered but the most recent Japanese dolphin population study seems to suggest it is no longer a sustainable practice.)

But the general public doesn’t really care about whether its sustainable or not. (Case and point: the state of nearly every other coastal fishery in the world.) People don’t like this hunt because they don’t see a fishery, they see a pod of dolphins getting bludgeoned and murdered in a bloody bay. And I get that. Entirely. So don’t think that I’m heartless when I suggest that if dolphins were not the ocean’s poster children, we wouldn’t give a shit. The truth is: we don’t. Yes, dolphins are highly evolved social and intelligent animals, possibly smarter than humans. Hell, they’re so smart that they even take time off from hunting to communicate with other species. And do drugs. But pigs are also smart, so are cows and birds.  And hundreds of studies have suggested that even fish have high levels of cognition. So really, who are we to judge the intelligence of animals? And to say that intelligence should be the criteria by which all animals are judged? We also turn ourselves inside out for the cute creatures, but we fail to acknowledge equally brutal practices when the animals are less attractive, possess fewer human characteristics, or can be found in the ‘Meat & Seafood’ section of the grocery store. If you disagree, I suggest watching the following clip that shows how some bluefin tuna are caught and killed. Now go and find an article in the mainstream news that talks about how barbaric that is. You won’t. This happens every day and not a word is said. Because “they’re just a fish”.

Anyone who knows me personally will know that I absolutely love animals. All animals. I’ve been this way since I was a kid. And yet, I am not a vegetarian. I am conservative with my meat consumption (for sustainability reasons), and try to eat organic and free-range meat (for ethical reasons), but at the end of the day, I’m still eating animals that have been killed by humans. (Some less humanely than others, I’m sure.) There are some animals I choose not to eat because they hold a sentimental place in my heart, but that does not mean that people who do hunt and eat those animals (e.g., dolphins) should be considered lesser or uncivilized human beings. In this regard, it’s just a different culture. The same way that other cultures have no problem eating horses or dogs or kangaroos, and some religions ask their followers to not eat pork, or beef, or fish over 12” in length, or to abstain from honey and other animal products altogether, or to cook only with halal meat. (Speaking of which, just today Japanese-caught whale from Antarctica was certified as halal. True story.) 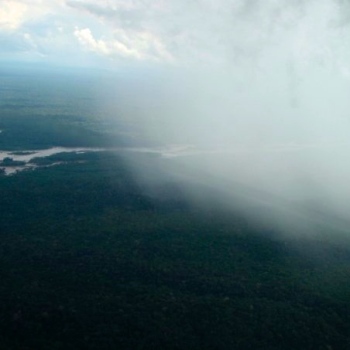 When I was in the Amazon rainforest in 2009, I spent a week in a very isolated, remote location, with a local tribe called the Achuar. Their village lifestyle was incredibly primitive*, yet their civilization has survived for hundreds (thousands?) of years. I didn’t agree with some of their practices (namely with regard to social norms and women’s rights), but it was not my place to come into their home and tell them they were wrong. And herein lies a big problem with how people are handling the Taiji dolphin hunt. If a 3-year old won’t eat her vegetables, yelling at her louder and louder to down her peas will get you nowhere. It will only make her resist more. The same is true in the case of Taiji. When you take a radical stance, you lose  credibility and sway. And no matter how hard people yell or pray for the dolphins or boycott Japanese products, I highly doubt Japanese fishers will stop taking dolphins as a result of public pressure from the western world. Their culture is far too proud for that and these animals are far too valuable. In fact, this external name calling and banner waving will probably only make them more stubborn and more determined to make a statement. Realistically, what I believe needs to happen is for the Japanese government (or other countries if that’s what it takes) to amend their fishing policies and regulations to prohibit live animals caught during these hunts from being exported (or imported) to aquariums. And the Japanese government needs to tighten up on labelling regulations and safety standards and prohibit the selling of dolphin meat. Only when there is no market for these animals, dead or alive, do I think there will be a stop to the hunt in Taiji.

I know that this post will probably draw some outrage or disbelief, but I think it is something I needed to say. Sometimes the best approach is not an attack rooted in insults and threats, but rather an educated and proactive discussion. I’m definitely not suggesting that I support what happens in Taiji (not by a long shot), but I hope my take on this issue encourages others to think twice about their reasons for protesting certain human activities. I seriously grimace at the idea of killing dolphins or whales for food, but I understand that it is acceptable in some cultures, just as eating beef is acceptable to me. Should it be? I don’t know. But if not, then killing any animal for food—not just the cute, smart ones—should incur equal outrage from our society.

He bought the ingredients before he knew what I was going to write about, so it was by pure coincidence that Wilf decided to make mozzarella-stuffed Italian meatballs for dinner tonight. (I actually find it kind of funny, but I probably have a darker sense of humour than most.) Anyway, in case this post didn’t put you off eating beef for a while the recipe he used can be found here. He also made a lovely green salad to go with them (they were pretty intense) and it made for a delicious meal. And, now I feel like I won’t be needing any more meat for at least a week…

*I don’t mean this to imply they are uncivilized or unsocial, rather I mean it to suggest they live very simply, employing hand-made tools, living entirely off of the land, and rarely coming in contact with non-Achuar people.

2 thoughts on “Let’s talk about Taiji. Like civilized people.”