I wasn’t able to make it downtown on Thursday for Chris Turner’s talk, but I continue to think about the three images that remained central in my mind when I read his book, The War on Science: Muzzled Scientists and Wilfull Blindness in Stephen Harper’s Canada. The first was a generic Ontario lake, the second: a shot from V for Vendetta of High Chancellor Adam Sutler shouting to his government groupies from a giant TV screen. The third (and most powerful) image was that of Philippines Climate Change Commissioner Yeb Saño when he broke down at the COP19 Climate Summit in Warsaw earlier this month while pleading with his fellow international delegates to translate climate change promises and signatures into actions. (I encourage everyone to watch the full video of his speech, but if 17 minutes is too long, the transcript can be found here.) And, while I’ll be the first to admit that these images may seem a bit random and disconnected, I think that in many ways, they actually embody the past, present, and future of the Canadian government’s relationship with science and, in particular, the environment. 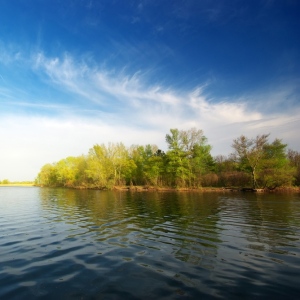 Although I think it would be impossible for even a sloth to read Turner’s book without becoming highly agitated (enraged even), I’ll try to focus more on thoughts than emotions. At its core, this book gives a non-partisan and overarching view of how Canadian research and politics have interacted since the early 1900s (primarily), and how scientific programs in our country have contributed to the formation and implementation of proactive environmental policies, both domestically and internationally. One of the key examples in this book is the Experimental Lakes Area (ELA) back east, which has conducted world-class research on the impacts of various anthropogenic and environmental factors on freshwater systems. This is also, undoubtedly, why I had the lake image floating around in my mind. 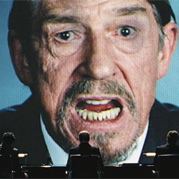 The second visual I associated with this book, that of an oppressive politician, is obviously most applicable to our current government. Since 2006, when empty promises, hypocrisy, and Harper’s ‘Economic Action Plan’ regime started to take over, there has been a steady decline in the value and use of scientific information by the leader(s) of our country. And, despite examples of serious cuts to the aforementioned world-class environmental research and monitoring facilities, bullshit excuses for opting out of international climate agreements, and detrimental amendments to previously existing environmental legislation, what really bothers me about this whole situation is the idea that the leaders of my country no longer care about providing accurate information to its citizens. Not only are government scientists being highly restricted in terms of what they say, where, when, and to whom they say it, but as a result of program cuts, they are losing the ability to conduct research in the first place. This reminded my very much of the themes from V for Vendetta, although I think this idea is best articulated in the context of the current situation by ELA co-founder David Schindler, who said, “the kindest thing I can say is that these people don’t know enough about science to know the value of what they are cutting”. The current state is such that government officials, with negligible environmental science training and experience, are ignoring the input of their own scientists and making decisions on the feasibility and safety of highly environmentally sensitive industry projects (e.g., the Northern Gateway pipeline*). Just in case some is lost in translation, this is basically the same as going to the dentist only to learn that a carpenter will actually be performing your root canal. Don’t worry though, he knows how to use a  saw— you’ll  be fine. 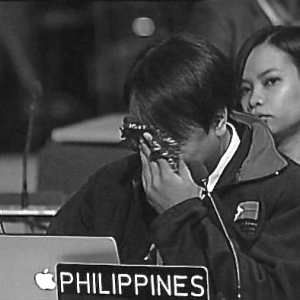 Lastly, the image of Yeb Saño. Here is a man whose country was shaken and blown to smithereens in less than a week. Members of his own family are homeless or missing, and millions of people in his country have been affected by a climate-related natural disaster. I cannot even imagine what that must be like, and luckily, I probably never will. Because, unlike the Philippines and other small island nations, Canada will probably benefit (in the short-term of course) from climate change. We are not prone to hurricanes, or drought, and our country is largely above sea-level. In fact, as our north melts faster and more extensively every summer, new intercontinental shipping routes are being formed ($$$), and access to potential fossil fuel resources that have been locked under ice for the last several thousand years is getting easier ($$$$$). And so, while someone like Saño fights for the world to pay attention to the disasters bombarding his country, our government continues forward with its arrow-laden clean oil sands commercials. That said, Harper did comment on the situation by saying that, “our thoughts and prayers continue to be with those in the Philippines who have been devastated by Typhoon Haiyan. We are standing shoulder-to-shoulder with the Filipino-Canadian families who have loved ones that have been affected by this tragic natural disaster.” He was also, “very pleased to announce that our Government will commit an additional $15 million towards emergency relief activities that should bring further comfort to the victims of this catastrophe. This brings the Government of Canada’s commitment to date to more than $20 million”. I am absolutely not going to criticize this contribution (as a stand-alone event), because I think its essential that countries help each other whenever possible. Yet, when looking at the bigger picture, I can’t help but think that Canada should also re-focus its attention on mitigating our contribution to these disasters in the first place. Or is that a silly idea when we can just give a few mill in relief whenever we need to clean up for the mess we’re helping create?

If we were to associate career trajectories with the avian life cycle, I would barely be a fledgling. And, not only am I a young scientist, I will also admit that I am highly inexperienced (although hopefully not too naive) when it comes to many matters political and economic. Still, in dealing with fisheries, I have learned a bit about the idea of discounting. This type of human behaviour is common: the value of the future is valued less than the present. As such, people are willing to sacrifice a long-term (and potentially uncertain) benefit if it means a guaranteed immediate return; even if a fisherman knows that a stock is overfished, he knows there are still some fish there now. So, rather than potentially refraining from fishing (which would allow the stock to rebuild, and result in better fishing in the future), he chooses to go fishing. Understandably, in many developing coastal countries, there is a high level of discounting associated with fisheries and that is why many of their coastal stocks are in rough shape. And, in line with an analogy of a hardware store in Turner’s book, I couldn’t help but feel that our government today is heavily discounting the future value of our environment while it aims to maximize current resource extraction and development. However, it is doing so not out of mortal necessity, but out of a desire to ensure both re-election and immediate national economic benefit.

Obviously I know that to every argument there is probably an equally convincing counter-argument, and that the truth lies somewhere in between. I won’t disagree that there have been cases where government science and governance has periodically clashed in the past; in fact, my supervisor pointed a few of them out to me this past week during a lunchtime chat. Yet, never have these incidents been so pervasive and come in such rapid succession. And so, not only from this book, but from all I’ve seen and heard over the last half-decade, I can’t help but agree that in the span of a few short years, Canada has gone from a leader in environmental research and stewardship to a laughing stock on the global stage. All for the sake of economic development.

One the bright side, while all of this government bullshit is depressing as hell, the one glimmer of hope that I can take away is that scientists are no longer keeping quiet. The opening pages of Turner’s book discuss a rally in front of Parliament in July 2012 put on by a large group of scientists, graduate students, and citizens all of whom were concerned about the environmental direction (or lack of direction) demonstrated by our current government. As Turner points out, when it gets to the point that some of the most quiet and discreet people in society feel obligated to stand up and speak for what they believe is right, it’s about time that the rest of the country started listening. At the end of the day, scientists don’t have the money, but they do have the facts. And no matter how you spin them, facts will always be facts.

*Just yesterday I read a story shared by a colleague on facebook regarding the Northern Gateway Joint Review Panel’s recent disregard for new information (published by DFO) discussing potential environmental impacts of the project. Specifically this report pertained to critical humpback whale habitat along the BC coast. Although the DFO report came out after the Panel’s initial deadline for submissions, this deadline could have been overridden if the Panel had deemed this new information to be useful in assisting with their decision. Unfortunately, they felt it was not. And while I’m not surprised, this is just another case of obstructing and ignoring the important of scientific research. The article, and associated documents can be found here.