Given what Calgary is dealing with, I feel like it would be highly disrespectful and insensitive to comment on the rain in Vancouver at this time. Seriously, it’s insignificant. Still, the prevalence of summer puddles and general dampness in town has resulted in a reversion to a level of warm beverage consumption that befits November. And, since coffee constitutes an important part of many people’s daily routine, I thought this would be a good time to share some thoughts on the matter with my Top 10 recommendations for java joints in Vancouver. Needless to say, the coffee at all of these places is top notch. However, I’ve separated the best of the best into categories, depending on mood and situation. (I’ve been to all of the following cafés at least five times over the course of the last year(ish), and typically order an Americano misto, so it’s more or less a controlled experiment.)

If I’d also included a category for friendliest staff, these guys would take it hands down! Despite the fact that I literally walked past the first time without seeing it, Dose has become a regular addition to my daily routine. In addition to the standard coffee choices, these guys also have their own specialty drinks, including a Nutella mocha and Salted Caramel lattè. Don’t expect to stay too long or study all day here though (there is only one table), but if you’re looking for a great drink to go in the South Granville area, this is absolutely your spot!

Best for Catching Up With A Friend Downtown: Revolver, 325 Cambie

I know that (in general) anything associated with Gastown has a bit of a pretentious and/or hipster stigma associated with it. But all that aside, this place does hot beverages right. The coffee itself is typically different every time (in terms of its geographic origin) and one would initially think some sort of mad scientist experiment is going on at the bar from first glance at their brewing equipment. It’s not big but it’s also not small (I’d say cozy), and it’s a really nice place to just chill with a friend and catch up on a sunny day (there’s a bench you can sit on out front) or in the rain. Definitely beats a plain old hectic Starbucks coffee date. By far.

I’m the first to admit that there’s nothing better than a cozy little café to curl up with your laptop or notes and work in the comfort of a home away from home. And with its more contemporary layout and furniture, Mink definitely doesn’t meet that criteria. But for some reason, I’ve spent the most of my café working days at this shop down by Canada Place. It’s really bright (not in an obnoxious way, but in a cheery way), it’s busy but never crowded, and of course, there’s wifi. In addition to solid coffee, Mink has the best frozen drinks in town- in either milk or dark chocolate. They give a piece of chocolate with all of their beverages too, which is a nice touch. Unfortunately this little taste makes you want to eat everything in their store. If you do decide to indulge in a little chocolate treat with your java, their original bars are super decadent (albethem quite pricey) but they also have a gluten-free (you’d never know!) caramel chocolate cake that is out of this world. I think that the nicest aspect of this place is that the staff are really easy going and never seem too bothered if you end up taking up an entire table for the whole afternoon. 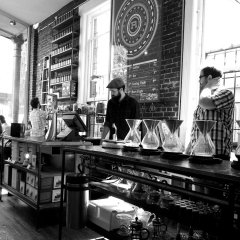 This place was a random discovery about three months ago. And since then, it’s become a regular stop for both morning weekend coffee and thesis working. Despite an incredibly flashy exterior, Culprit is a cute, quaint spot that makes no bones about its belief in the quality of its coffee. That said, it’s by no means conceited, and the staff is super chill and friendly. These guys make all their food in house as well (everything from pastries to soups and sandwiches), and there is a definite emphasis on gluten-free and vegan delights. If you’re headed to Kits Beach, this by far the best place to grab a hot bevy en route.

So I’ve learned that UBC’s coffee is pretty hit and miss. Well, maybe it’s just that there isn’t a lot of selection. But without fail, Great Dane is consistently impressive— if you can remember how to get there. On the edge of campus by the main bus loop, it’s not the biggest café (and it’s made smaller by students crammed in trying to study), but it’s the best. In addition to coffee, Great Dane is also home to the best London Fogs in town and a super cute patio (complete with fireplace) to sit out one if you have the time.

Most Hipster: Nelson the Seagull, 315 Carrall

If you thought you knew hipster, think again. Nelson takes it to a whole new level. And if, like me, you’re not über hipster yourself, prepare to get weird looks from the other clientele. That said, if you’re not the type to care too much, the coffee here is great and the food is nice and fresh. It’s also my second fave café to work in because it’s quiet and, like Mink, no one cares if you stay all day. (The wifi is a bit hit or miss though, so it’s important to get a spot at the big table in the back.) I also like that, since they are in a bit of a rough part of town, they’ve set up a ‘Suspended Coffee’ program so customers have the option to purchase a coffee in advance for someone who might not otherwise be able to afford it. It’s little gestures like this that can make all the difference, and combined with the amusing atmosphere, great bread, and delicious drinks, Nelson will be tops on any coffee-lover’s list, any day. 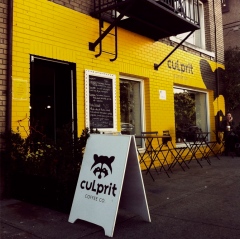 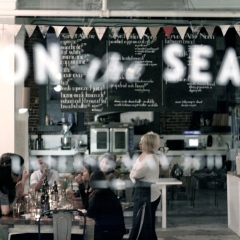 This is as close to France as you’ll find in Vancouver. Their coffee is solid, but the real reason to spend time here is for their pastries (no question: go for the twice baked almond croissant). They have most of the standard French fare, from brioche to macarons to cakes that look more like sculptures than food, as well as chocolate. Lots of chocolate. Speaking of which, this is also home to the best hot chocolate in town. Their fancier treats aren’t cheap, but they’re well worth it. The only downside is it can be a bit packed on Saturday and they’re not open on Sunday. Oh, and Thomas himself spends a good deal of time here and with his beautiful, positive outlook on life, he’s a really cool guy to talk to when it’s not too crowded. If you’re looking to indulge in good quality vienoisserie, this is your spot.

It’s new, so if you haven’t heard about it yet, don’t worry; you have now. Set amidst the industrial void that is 6th and Fir, Beaucoup will surprise the hell out of you. Everything about this little café is amazing – especially its Parisienne-inspired baking and coffee. But equally impressive is its overall vibe. Beaucoup’s priorities and overarching mission are based on spreading kindness and living life however makes you happiest. And coming from a little restaurant, I think that’s a pretty cool outlook. So, if you’re in a bad mood, or just looking for a little slice of joy in the middle of nowhere, this place is guaranteed to make you smile.

I’m slightly conflicted in including Trees here, because as far as I know, they only have two locations. And the one downtown on Granville has thus far failed to impress. That said, the Trees at 10th and Arbutus is one of my favourite coffee stops in Kits. I think maybe it’s their baking that gets me most (try a white chocolate raspberry scone and you’ll never buy a pastry from Starbucks again) and their cheesecake (key lime for the win!) is pretty damn good too. As mentioned earlier, I’m also a Caffè Artigiano girl. I haven’t been there as often of late, as I’ve been aiming to try less commercial locales, but in terms of quality and consistency, these guys have yet to fail me. And although not as ubiquitous as Starbucks, there’s definitely at least one Artigiano in each neighbourhood. So if you need a quick pick me up en route somewhere, and it’s a choice between the red awning or the green… go with the red!

OK, so of all the places mentioned here, I hate to say it, but the Blue Parrot’s coffee isn’t quite on par. But what it lacks in taste, it makes up for in atmosphere. Located at the end of the Granville Island Market, there is nowhere better in town to people watch while taking in your daily caffeine. At least in terms of diversity of patrons. These guys also have a killer view of (you guessed it!) English Bay and False Creek and if they had wifi, I’d probably be here a lot more often. 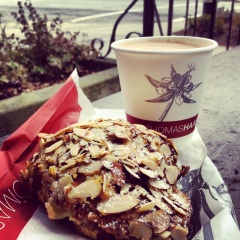 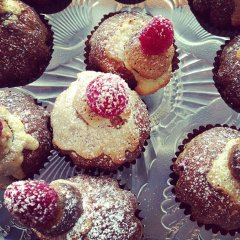 It might be apparent, but I tend to frequent places that are either in Kits or downtown. So, while the candidates for this list were fairly extensive, a few places were not considered because I’ve not yet tried them. Notably, these include Finch’s Tea and Coffee and Gene, both of which I have heard good things about.

I have also only been to Le Marché St. George once, but if I had chosen to include a family-centric/ kid-friendly category, this place would definitely be high on the list. Oh, and 49th Parallel is the place to go if you want an amazing donut (courtesy of Lucky) on the side, but I think everyone already knows that.